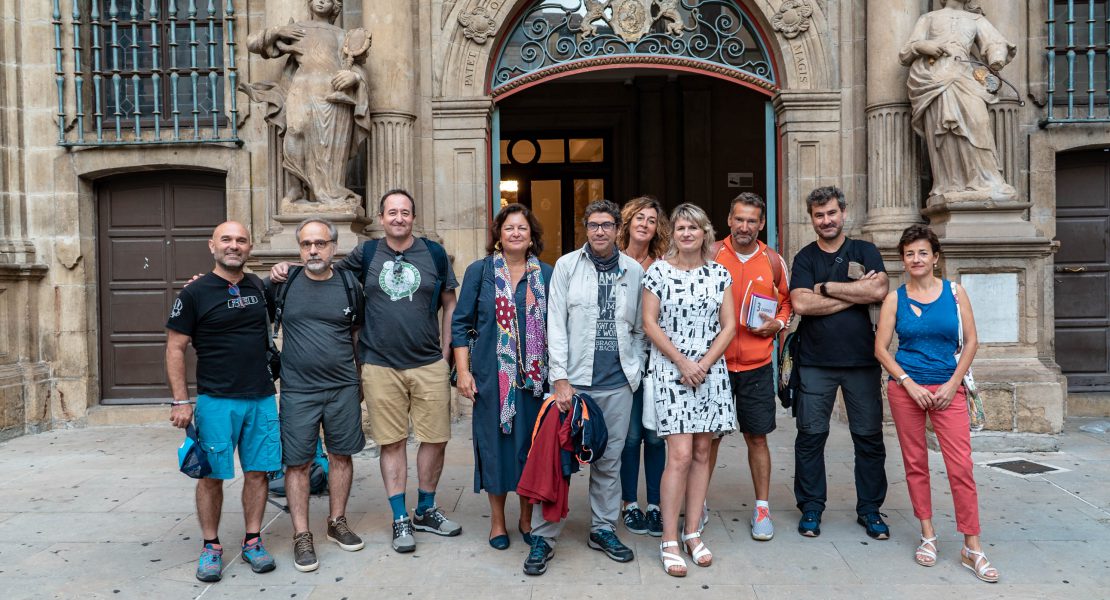 Santiago de Compostela. – After a few days touring Navarra, La Rioja, Castilla y León and Galicia; the production team of the 3Caminos series arrives in Santiago de Compostela, thus completing El Camino. The team has entered the Plaza del Obradoiro where a representation of the Xunta de Galicia has been waiting for them: Anxo Lorenzo (general director of Cultural Policies), Jacobo Sutil (director of the Galician Agency of Cultural Industries) and Dolores Meijomín ( Coordinator of Audiovisual Policies).

3Caminos, is the first international and transmedia television series on the Camino de Santiago, produced by Ficción Producciones and Beta Films, which has a subsidy of 1.5 million euros by the Xunta de Galicia as a specific audiovisual project for to Xacobeo 2021.

Throughout the trip, the production team has been able to experience the Camino as the experience of a physical trip, but also an interior one, so, with a renewed vision, it faces the series as a challenge to convey the metaphor of the passage of time. 3Caminos will take place during three periods in which we will see how the Camino has changed over the years. A metaphor of what the characters change during the three decades, to show from the most characteristic and emblematic to the most intimate and unknown.

The team has been able to visit, for the location, numerous heritage sites, visiting dozens of chapels, churches, cathedrals, bridges … Or various accommodations, from older hostels to some more renovated to cover the different times of the series.

Nature will also be an indisputable character in the series where we can see multiple roads, rivers, parks, reservoirs … that run along the Camino.

The locations photographed by Tommie Ferreras (PDO of the series) and written down by scriptwriters Alberto Macías and Juanra Ruiz, who have been collecting the premises given by one of the directors, Tito López Amado, have been numerous. An experience that has served the team not only for the realization of the locations, but also to live the experience of the realization of El Camino and feel the Xacobeo spirit.

The Camino is another protagonist in this story, which makes the project a constant movement that will show the great landscapes and places of the Camino de Santiago internationally.

The series is having a great reception in the communities where it will be filmed, in fact, the team has had the help of Nieva Uriz Domezáin (development of tourism products) in Navarra, which has been able to teach them all the most interesting secrets and places of community.

In La Rioja, they had the help of Andrea Álvarez Alonso (coordinator Film Commission La Rioja) and in Casilla and León with the best recommendations of Ana Patricia Fraile Prieto (head of the Cinematography and Visual Arts Section at the Junta de Castilla y León) , which has facilitated the work and the search of the locations.

For all this, Tito López Amado, faces the series as “a journey that brings me back to my roots. The Way is silence, get you away from all the noise. ”

3Caminos, the international series that will premiere on Amazon Prime Video at the end of 2020, is getting closer to starting its filming, scheduled for the beginning of the year. The series will explore the experiences of several young people who connect on the Camino de Santiago over the years and meet again in three moments of their life to return to pilgrimage: 1996, 2006 and 2021. The spectators can see the development, the growth and the changes of their lives through flashbacks and flashforwards in various locations in Navarra, La Rioja, Castilla y León, and Galicia.