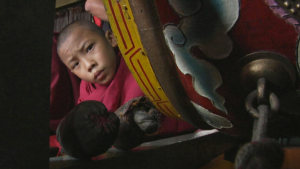 Synopsis: Tenzing and Meena are two young Sherpas who live on the plateau of Tibet. Since childhood they have had to face extreme living conditions imposed by tradition: grazing, slaughter and meat drying in cold air of the high plateau, the contact with a unique nature, the long reunions around the fire, the act of the first experiences in a family and social context don’t seem to predict any major convulsions. The transition from childhood to adulthood is presented in a manner so abrupt as the conditions of their environment. For him it was time to start traveling to Nepal during the winter, so he has to guide large herds to sell their products: dried beef, salt, beads… She has to stay alone in Tibet during the long winter months, and strongly feels the hardness of this separation. Life is no longer a game. The course of time brings new and adverse family circumstances. Habits, religion and tradition come together against them, tracing paths in opposite directions their lives. Very hard years follow, but would it be possible that fate takes a new twist and play, this time, in their benefit?