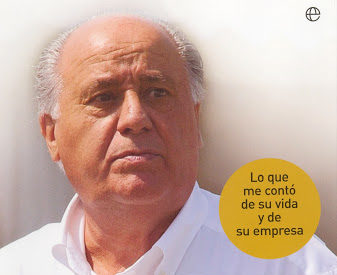 Amazon Prime Video announced today its next exclusive fiction project, a series – as yet untitled, based on the biography of Amancio Ortega written by Covadonga O’Shea, This is Amancio Ortega El man who created Zara, which will begin to be produced in Spain shortly by the hand of Ficcion Producciones.

The adaptation will remain faithful to the biography written through conversations with Amancio himself and members of his closest circle, recounts the journey of the Galician businessman from his most humble origins, to the creation of Inditex. Its plot, developed in 8 episodes, will value the tireless effort and remarkable simplicity of this character whose vision has revolutionized the fashion industry and who has become a benchmark for Spain and for business schools around the world.

“Amancio Ortega is undoubtedly the most internationally recognized Spanish businessman and a key figure in the success of Spanish fashion worldwide with an incredible personal story,” stated Ricardo Cabornero, Head of Prime Video Content, Spain. “We want Prime members to discover not only their hard work to achieve their great business success, but also their more human and less known side.”

“For 6 years we have been pursuing as producers and Galicians to bring to the screen the story of a simple man endowed with what only a few have. As he himself says in Covadonga’s book: ‘I have not been alone in this and I do not deserve any recognition other than the work and the fortune of having surrounded myself with the best,’ “said Mamen Quintas, executive producer of the series. “This is what we will tell in this production, his journey from the age of 12 until his 70s with fascinating travel companions who will reveal to us the tireless path of success. We will see a post-war Coruña to which Amancio aspires to bring light and joy through fashion, democratize good dress and give women of the time the possibility of dressing well in their desire to join work and social life. This series was a necessity and now more than ever ”. Produced by Ficción Producciones, with the participation of Radio Televisión de Galicia, and FORTA, and with a script written by Goya winner Ángeles Gonzalez-Sinde along with Marisol Ferrer, Mercedes Cruz and Daniela Fejerman, the project is in the phase of pre-production and plans to begin recording in the coming months in various locations, including A Coruña, Barcelona, ​​New York, Paris and Lisbon. Norberto López-Amado (El tiempo entre costuras, Hernán, 3Caminos) will be the director of this production that can be seen exclusively on Amazon Prime Video.